Dog ownership linked to longer life after heartattack and stroke 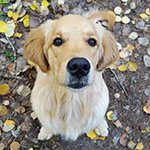 Researchers at the Department of Medical Sciences have investigated whether dog owners have better survival after having suffered from a heart attack or stroke. The results show that both stroke patients and heart attack patients who own a dog were less likely to die during follow-up than patients who did not have a dog.

According to a new study carried out by Tove Fall and her research group, owning a dog is associated with an increased likelihood of living longer, especially among people who've previously had a heart attack or stroke. The findings are published in Circulation: Cardiovascular Quality and Outcomes. Read the entire press release on the University's web page (only in Swedish).

In a study of dog-owning and non-dog owning survivors of heart attacks or strokes, researchers determined that dog owners across the board experienced lower rates of death from heart attacks or strokes. The study was conducted using the national Patient Register and included information about all patients between 40 and 85 years of age who had suffered either a heart attack or a stroke between 2001 amd 2012.

The people who owned dogs in the study tended to have a "better outcome after a major cardiovascular event," the researchers found, although the study did not prove cause and effect. The reason could be due to an increase in physical activity and decrease in depression and loneliness among dog owners, which previous studies have confirmed.

So far, the article has been downloaded over 7000 times and news media such as CNN, Times, Washington Post, CBS News  and many more have written articles about it. Read some of these articles here.

BBC also made a radio interview, about 18 minutes in to the program the results from the project are mentioned.