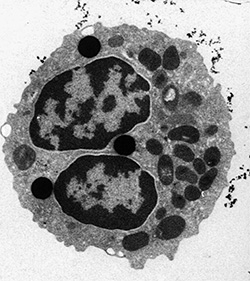 Who becomes an allergic and who develops severe asthmatic problems? How do we protect ourselves against parasites? How do we prevent the abuse of antibiotics? Can we predict the development of arteriosclerosis and death in cardiovascular disease? Much of the answers to these questions are provided when we understand the role in the inflammatory process of the two white blood cells, the eosinophil and the neutrophil granulocyte.

The white blood cells, the eosinophil and the neutrophil granulocytes, secrete potent proteins and other molecules of importance for our defence against bacteria, virus, parasites, and fungi. This is an adequate reaction of immense importance for our survival. Secretion of these molecules, however, may also occur to large extents in certain disease conditions and is then often destructive to the body. We have shown that the eosinophil and its secreted proteins i.e. ECP, has a central role in the development of allergic and asthmatic symptoms. We also have strong indications that the same cell is central in the defence against parasites, but above all, probably, for the development of the many adverse consequences of parasite infections. One way to reduce the abuse of antibiotics is better diagnostic means that in the acute phase of an infection distinguishes between subjects infected by bacteria and who would benefit from antibiotics from those infected by virus and for whom such treatment is redundant. By the measurement in blood of specific proteins secreted from neutrophil granulocytes i.e. HNL (NGAL), or by measurement of changes in cell surface receptor expressions, we have indicated novel means to increase the specificity and sensitivity of this important distinction. The development of arteriosclerosis is basically an inflammatory process and the extreme consequence of this process is death in cardiovascular disease. With high sensitive assays that enables the monitoring of the condition of the heart i.e. troponins, we have shown that many more subjects with a poor prognosis due to arteriosclerosis may be identified. One of the proteins that is secreted to the largest extent from the neutrophil granulocyte is myeloperoxidase, MPO. This protein plays a central role in the development of arteriosclerosis and the levels in blood of MPO is a strong indicator of the activity of the process and strongly related to the survival of the individual. The development of simple assays for MPO, therefore, has high priority.